The coplanar waveguide (CPW) has been used for many years in RF and microwave design as they reduce radiation loss at extremely high frequencies, compared to the traditional microstrip approach. And now, as edge rates continue to rise on the PCB, they are coming back into vogue.

The classic coplanar waveguide (CPW) is formed by a microstrip copper conductor strip separated from a pair of copper ground planes pours, all on the same layer, affixed to a dielectric medium (also known as the core or prepreg).

In the ideal case, the thickness of the dielectric is infinite. But in practice, it is thick enough so that electromagnetic fields die out before they escape the dielectric material (sometimes referred to as the 'substrate').

A variant of the coplanar waveguide is formed when a ground reference plane is provided on the dielectric's opposite side. This is referred to as a conductor-backed or grounded CPW. 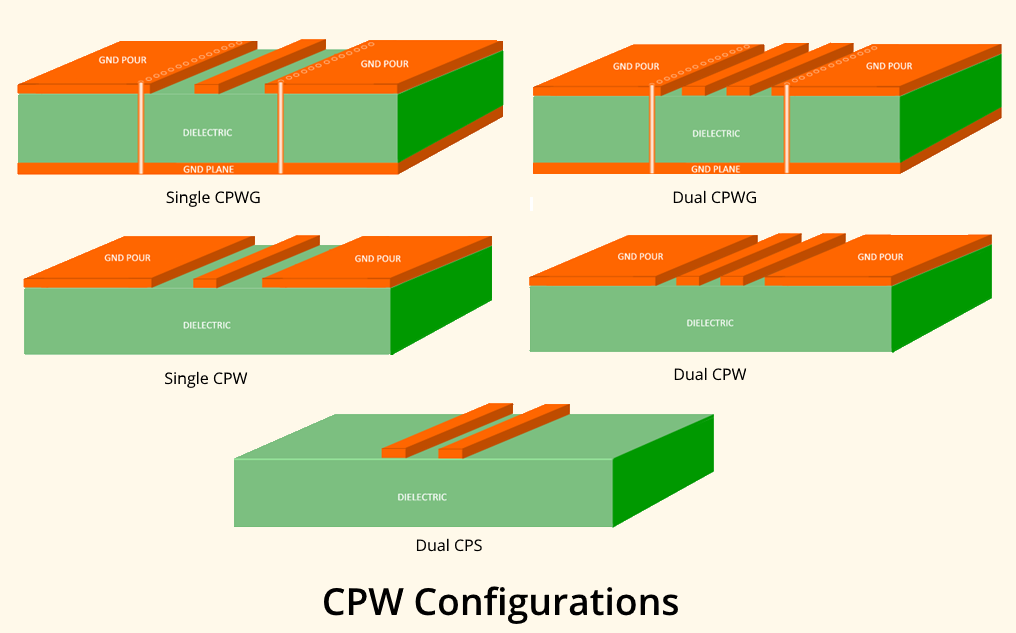 The mathematical expressions for a CPW are derived from conformal mapping techniques and elliptic integrals to calculate strip configurations' impedance. A conventional CPW, on a dielectric substrate, consists of a center strip conductor with semi-infinite ground planes on either side.

The physical structure of the CPW allows for a quasi-TEM mode of propagation. TEM is an abbreviation for the term 'Traverse Electro-Magnetic' in which the electric fields and magnetic fields are perpendicular to each other in addition to the direction of propagation. A quasi-TEM wave only exists in a microstrip lineâon the outer surface of a PCB.


Furthermore, the impedance is determined by the ratio of trace width to clearance, so size reduction is possible without limit, the only penalty being higher losses. Also, a virtual ground plane exists between any two adjacent lines, as there is no field at that point. Hence crosstalk effects, between adjacent lines are feeble.

The ICD Tool supports the calculations for 5 different CPW configurations, as shown in the above illustrations. Also, the help manual provided with the ICD tool provides more detail.

Barry Olney, the owner of iCD and the developer of the iCD product, has over 30 years of experience in PCB design and his knowledge of EDA tools. Barry writes a column on PCB high-speed design for PCB Design Magazine. Links to past articles are provided below. These articles are a wealth of engineering information as they relate to high-speed design issues.