With the 64-bit Altium Designer Version 18 release, there may be some compatibility issues that arise when installing a database library. Though this document focuses on Microsoft Access, the same concept is true for any type of database.

Like printers, databases have drivers, known as ODBC drivers – Open DataBase Connectivity.  The purpose of these drivers is to provide an outside software tool access to the information in a database.  Companies that sell databases also provide these drivers, usually free of charge.

It is not required to upgrade a database and the database accessing software to 64 bits.  However, the software reading the database must have an OBDC driver based on its 32 or 64-bit coding.  For example, Altium Designer version 18 requires a 64-bit ODBC driver, even if the database itself is only 32-bit.

For MS Office products, the ODBC driver for MS Access is installed during Office installation.  Though Windows 10 is a 64-bit operating system, the non-professional versions of MS Office are currently 32-bit.  Note that even those versions of Office that are available in 64-bit will install the 32-bit by default; you have to specify the 64-bit version during setup and installation.

To determine which driver(s) have been installed on your computer in Windows 10, open the ODBC dialog.  This can be accessed by typing “ODBC” in the operating system’s search prompt.  The dialog will show the driver and its status for 32/64 bits.  Note that there is both an ODBC 32 and ODBC 64 Data Source Administrator dialog box; however, either one will show the status of the driver: 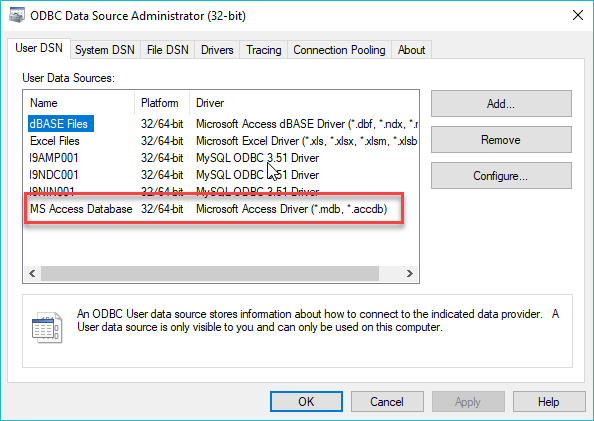 For MS Access, if 64 bits is not listed in the ODBC, it will need to be installed.

Altium has issued a procedure for the 64-bit MS Access installation.  The title:

The link is available by clicking here.